I’ve always had the desire to make the work a unity… to make all the elements – the periphery line and the internal line, the surface, colour – equal, totally locked together.

Robert Mangold spent his childhood in Buffalo, New York. In 1956 he enrolled in the illustration department of the Cleveland Institute of Art, soon moving to the Fine Arts department to begin his training in painting, sculpture and drawing. After graduating from the Cleveland Institute of Art in 1959, he got a master’s degree at the Yale University School of Art and Architecture, along with Brice Marden, Richard Serra and Nancy Graves. In 1962 he moved to New York and started working at the Museum of Modern Art. In 1964 he left this job and held his first solo exhibition, Walls and Areas, at Thibaut Gallery, New York. During this period Mangold worked with industrial materials, which led the art critic Lucy Lippard to define his style as “industrial naturalism”. Lippard observed that Mangold’s work alluded to industrial iconography – colours mixed with white, highly delineated forms that could be fragments of a giant sign – without dropping the tension caused by curvilinear movement and the static declaration of painting as an object.

In the 1980s Mangold continued to explore one of the central interests of his work; the relationship between figure and surface. The series X, + and Frame Paintings, which were developed during these years, reflect an intense evolution. As their titles indicate, X and + allude to mathematical operations. Made with rectangular or square canvases, they have the linear figures of X or + inscribed in pencil, respectively.  These inscribed figures eliminate any illusory optical effect and maintain the action on the surface. In the series Frame Paintings Mangold takes one step further; structures composed of many parts – four or three canvases – which are arranged to create a frame. Above them, drawn by hand, runs an irregular, hand-painted ellipse. This ellipse touches the inner corners of the painting, the inner and outer edges of the rectangles, again emphasizing on the surface of the painting. One of the central elements of these works is the link that it creates with the wall. The wall is which is framed by the work and also surrounds it. In 2009 Parasol Unit dedicated the exhibition Robert Mangold X, Plus and Frame Paintings to bring together and present these well known series of works, underlining their relevance in the history of contemporary painting. 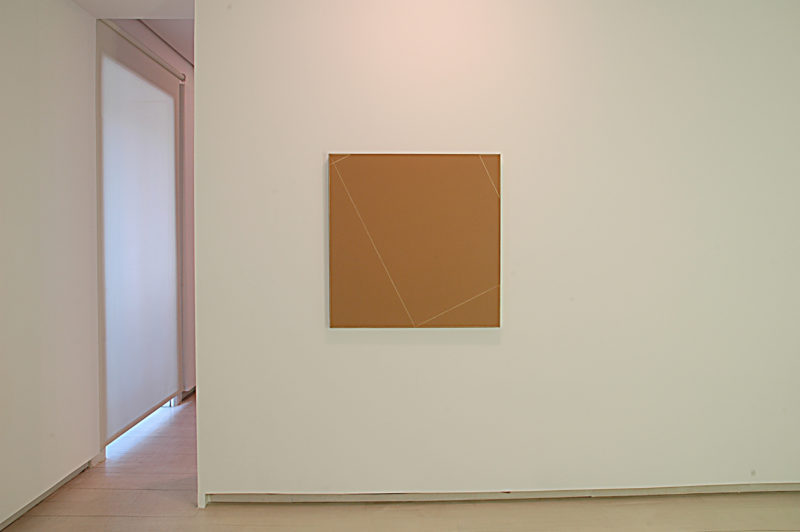